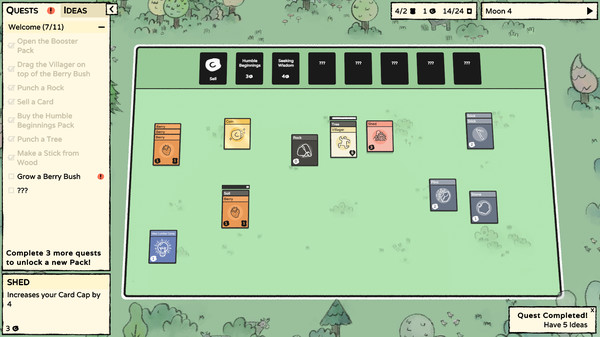 I was a massive fan of Cultist Simulator when it came out, I loved the way the card interface worked and the artwork was beautiful. I was even considering getting a tattoo of the cult symbols but after all the allegations and everything decided against it.

Anyway, this has that same interface paradigm, and is just good fun. I used to be a big player of modded Minecraft, particularly SirSengir’s Forestry mod with all its bee genetics shenanigans. This is a spiritual successor to that mod, and it’s a lovely place to spend time in. Plus it’s a coop game both my partner and I can play at the same time which is good. I’m really going to miss Zachtronics, their games are fantastic (although I still need to play their most recent one). All of their recent games have included a mini-game that’s a different spin on solitaire and I have spent many an hour just relaxing in them (particularly Sigma’s Garden). I have often wanted to be able to play them on my phone or iPad, now I can, and so can you!

Furthermore, the new tarot-based game is outstanding and I desperately want a physical copy of that deck, the art is just gorgeous. 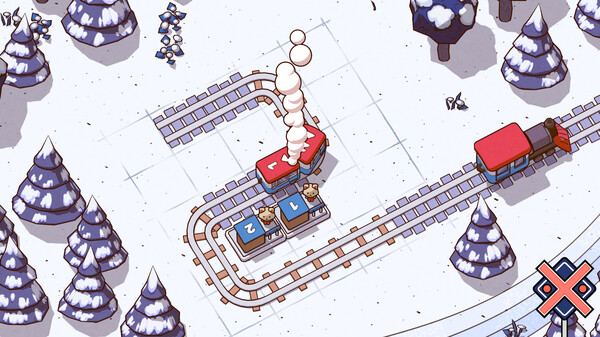 There used to be an amazing iPhone game called Trainyard which I adored (I say used to because it hasn’t been updated for 11 years, so I think it won’t work on much). This game scratches that same itch of train puzzle shenanigans. I highly suggest it.

The art is just gorgeous too A lot has been said about this great reverse bullet hell game, but my favourite thing about is that you only have to move. There’s literally only 4 buttons to think about. You can just veg out for 30 minutes and watch some numbers go up. A simple concept, executed beautifully. 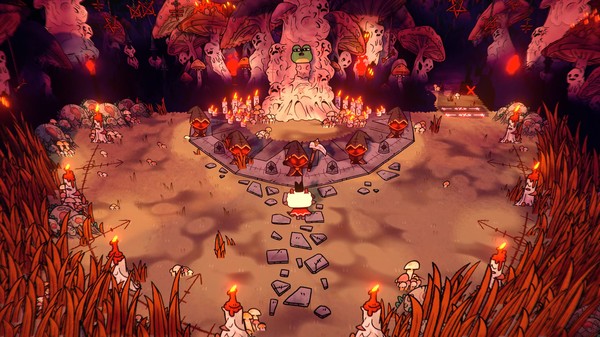 Hey, it’s a game from Melbourne! Cult of the lamb is adorable and full of polish, every zone and your home base is just dripping in atmosphere, and it really well rides the cute and creepy line, a joy to spend time in. It’s really been a year for dying social spaces, Firepit may have been ahead of the curve here. Hyper//Echo is over, and you can no longer experience it, very much by design. I always love weird and wonderful explorations of mark making and social spaces. I thoroughly enjoyed my time exploring the strange architecture and trying to create meaning for myself of why it is, and why it soon will no longer be. I’ll admit I’m a dog person, but this game was beautiful, exploring and being part of this world with all its cute robots was just wonderful. The atmosphere was divine. One of my favourite experiences this year. I still haven’t finished this game, also thank god for accessibility options in games because I certainly wouldn’t have got as far as I did if it wasn’t for them. But this game scratches a Zelda itch in such a lovely way with all its absurdly complicated puzzles, note-taking, and hidden zones, would teach myself a conlang again. Who would have thought a roguelite city builder would be such a good concept, but this game is outstanding. I adore the Settler and Anno games, and Against the Storm really captures the best parts of these games. The mid-game in city builders where you are only just keeping everything running is the best, and against the storm distills it wonderfully. There are so many things that could go well or wrong at any moment, and oh boy is it a wonderful time.

Game came out in 2005 and is one of my favourite games of all time (I remember first playing it at the yearly IGA exhibits at ACMI back in the day). It received a remaster this year and I dived back in once again

I’m finally playing an MMO again, I’m enjoying the famous free trial so much that I just thought I should add it. it’s just a nice world, and I’m starting to get really attached to the characters, except you Thancred.

I think if you graded by playtime what I’ve played this year, Threes would be several orders of magnitude ahead of everything else. Asher Vollmer really created the perfect game (also Beast Breaker and Guildlings are spectacular and should also be adored).

I’m confident this game is amazing, I just haven’t got around to playing it yet.

Again, I’m confident this game is amazing, I just haven’t got around to playing it yet.

1. I Was a Teenage Exocolonist

This has been one of my favourite experiences of all time. I remember first hearing about it in an offhand remark about it being good and tried it with low expectations, and oh boy, it did not take me long to fall absolutely head over heels in love with this game. The art and the soundtrack are to die for (favourites are C418’s “Quiet”, and Francis Aravel’s “The Child You Were”. Both bring me to tears every time).

The characters are all wonderful (except for a character I can only describe as an amalgam of Stardew’s Shane and DA2’s Anders, and I loathe them more than the sum of their parts, so of course they’re a fan favourite). There are two trans-femme characters, TWO, and the way your character’s gender is treated is exquisite. From the best-in-class pronoun options, to the ability to change your gender at any times, it gets so much right. Hell, there’s even a great prompt for you to… pick your genitals which felt weirdly touching? Admittedly, it would be nice for other characters to acknowledge your gender better in the dialogue, but I can’t really imagine how that would work.

The world is beautiful, and painful and magical and melodramatic. Playing it again and again with different choices is very rewarding, it does strive for I guess higher ethical and moral themes that it really manages to reach, but I’m still obsessed with this story, just perfection.